Moving from Osaka to Kanazawa, the UNESCO appointed City of Crafts and Folk Art in the Creative Cities Network.

How to travel between Kanazawa and Osaka:
By limited express train
JR Thunderbird limited express trains (LTD. EXP THUNDERBIRD 33) provide direct connections between Osaka and Kanazawa. The one way journey takes 2.5 hours and costs 4,620 yen. (Note: this is the cost for Non-reserved seat)

You can easily get the train ticket at Osaka Station, go to the ticketing booth and get the ticket the day before your travel date to avoid chaos. So I grabbed the morning train intended to reach Kanazawa before 12p.m. and go around for sightseeing because I only have one night in Kanazawa.

There are plenty of hotels around Kanazawa Station, you’ll be able to see once you walked out from the station. Since I’m on budget travel, of course guesthouse is always my choice.

Pongyi Guesthouse
The guesthouse is walkable distance from Kanazawa Station, and the owner of the guesthouse will attached the map & direction along with your confirmation email.

The owner and other guests I met during my stay, we’re making the Origami Cranes (Paper Cranes) which usually Japanese used for wishing and praying.

Kanazawa is a very quiet and ancient city, there are few popular sightseeing places, one of them is the 21st Century Museum of Contemporary Art which is famous for the ‘pool’ that flooded my Facebook timeline for once. 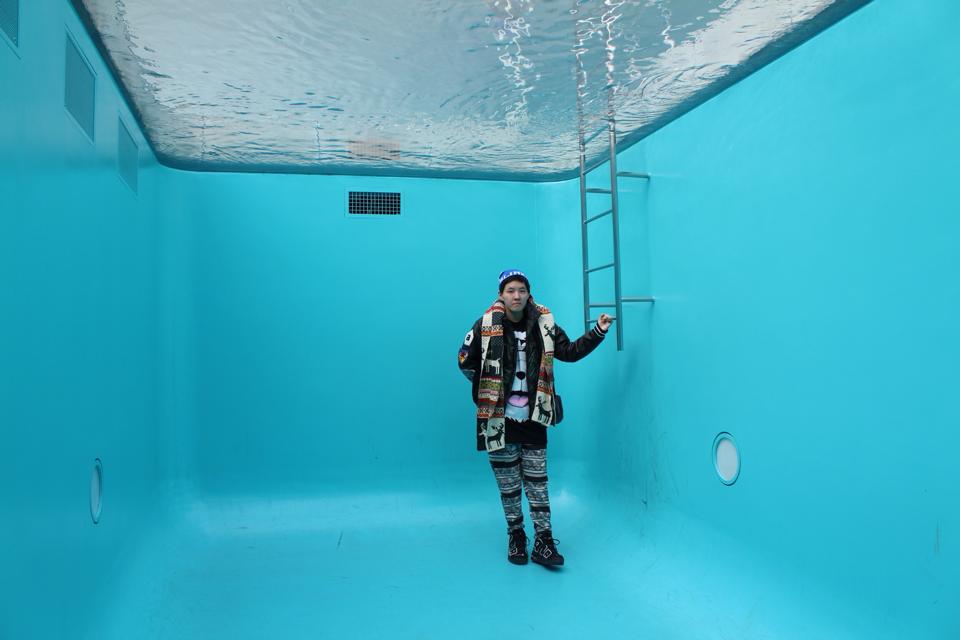 Kanazawa is do-able in One Day, but you have to start your day early. You can get the sightseeing information at the Tourist Information Center or also you can ask for help from the owner of the guesthouse. (Note: They’re really kind people!)

You can get the Kanazawa Loop Bus One Day Pass for 500yen to go hop on and off.

Other than the 21st Century Contemporary Museum, Kenrokuen Garden and Kanazawa Castle are popular spots.

Kenrokuen Garden may be good to visit during the Spring, I went Kanazawa on January which is still in the Winter time, but I was really excited because this is my first time seeing snow (you can understand me if you know the weather in Malaysia is forever tropical).

The Kanazawa Castle is just opposite Kenrokuen Garden, you can walk the castle after your visit in Kenrokuen.

Just to say, it’s a Castle…which makes it nothing much to see other than heritage. You can walked through the castle and it’s connect to the 21st Century Contemporary Museum and also the Oyama Jinja Shrine.

As you know, Kanazawa is near to the coast, so what a must eat is the seafood and sushi of course!! I was supposed to go to Otome Sushi (乙女寿司) but later I found out that this shop is really expensive after a discussion with the guesthouse owner, and the owner recommended another shop for us which is IPPEIZUSHI (一平鮨), the price is good is just that the shop is slightly hard to find as so as Otome Sushi.

Another place for seafood and sushi is Omicho Market, is also one of the popular tourist spot, you’ll find a lot of seafood restaurants in this market!

Omicho Market is a 15-20 minute walk or a short bus ride from Kanazawa Station on the way to the city center. Get off at Musashigatsuji bus stop. It is served by most buses departing from the station’s east side, including the JR buses.

Kanazawa is a small city by the coast, I wouldn’t say it’s not worth visiting, but if you have extra time, do spend a night or two in this city, especially for sushi and sashimi lover!! 😀