Often after visiting a country, people asked ‘So what is your favourite city here?’ and undoubtedly, my favourite city in Turkey is none other than the Fairy Chimneys – Cappadocia.

I spent a good 2 full days in Cappadocia and I wish I had more times to spend in this beautiful city. To make it easier for understanding the landscape in Cappadocia, usually tour agent will name it into North and South Cappadocia tour.

The South Cappadocia also known as green tour visits the underground cities as well as ventures into the neighbouring city of Aksaray to Ihlara valley & Selime monastery.

There are two popular town for tourists to based in Cappadocia which is Goreme and Urgup. So whether to stay in Goreme or Urgup, it’s your call, just a short note that Goreme does get touristy during Summer time.

Since I’m on a budget tour and has limited time to spend in Cappadocia, the itinerary crafted by my tour agent is as follows:

After arrive in Goreme from Pamukkale by overnight bus, pick up from bus station and transfer to hotel and then at 9:30 depart for a full days tour of Northern Cappadocia, we will visit the Goreme Open Air Museum, Devrent Valley, Avanos, Pasabag, Cavusin village. After that, we head for Turkish Night.

Do not confused upon arrival in Nevsehir Bus Station, the bus station is the nearest to Cappadocia hence you will need a ride of about 25 mins to the town.

The Goreme Open-Air Museum resembles a vast monastic complex composed of scores of refectory monasteries placed side-by-side, each with its own fantastic church. 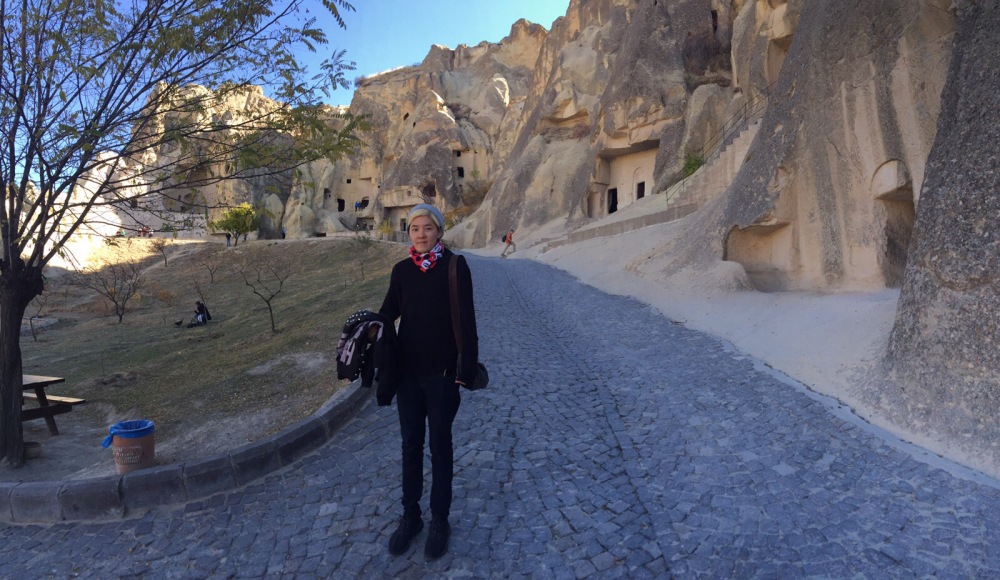 It is obviously the first sight to be visited by any traveler in Cappadocia, standing as it does in the very center of the region with easy access from all directions. It is only 15 minutes walk (1.5km, 1 mile) from Goreme village center. It contains the finest of the rock-cut churches, with beautifulfrescoes (wall paintings) whose colors still retain all their original freshness. It also presents unique examples of rock hewn architecture and fresco technique.

The Goreme Open Air Museum has been a member of UNESCO World Heritage List since 1984, and was one of the first two UNESCO sites in Turkey.

Devrent Valley, which is also known as Imaginary Valley and also as Pink Valley does not have cave churches like the other valleys of Cappadocia. There are no Roman castles or Roman tombs in Devrent Valley, either. Actually it was never inhabited. So what makes it so famous? The lunar landscape!

Devrent Valley (also spelled as Dervent Valley) reveals many different rock formations and is only a 10 minute drive from Goreme. The small fairy chimneys in the valley form a lunar landscape, or moonscape, by their strange look. The valley also has many animal shaped rocks. It looks like a sculpture zoo made by nature. Some of the most important, or the easiest seen animal shapes are camel, snake, seals, and dolphin. If you let your imagination run free you will find many others. It is like looking at clouds and seeing a dragon. There is even a rock pillar which looks like Virgin Mary, holding Jesus Christ.

Pasabag in Cappadocia is located on the road to Zelve, coming from Goreme or Avanos. Highly remarkable earth pillars can be seen here, in the middle of a vineyard, hence the name of the place which means: the Pacha’s vineyard. Pacha means “General”, the military rank, in Turkish and it is a very common nick name. This site is also called Monks Valley. The name was derived from some cones carved in tuff stones which stand apart. Currently, there is a vineyard and a number of tuff cones standing right next to the road.

The village of Çavuşin is worth a look. It is just 2 miles north of Göreme, the most famous tourist attraction in Cappadocia. It is easy to get there is by taking the main road from Göreme to Avanos, or to hike along Güllüdere Vadisi “Rose Valley”, a pleasant path parallel to the main road.

An impressive cliff visible from afar is located in the upper Çavusin.
This rock is composed of numerous cave dwellings, inhabited until the early 60s. The landslide risk is important, the Turkish state has decided to relocate the people in stone houses built in lower Cavusin.

Everything in Cappadocia is about cave, you can stay in a cave hotel and dine in a cave restaurant!

This is the cave restaurant we went to, the environment is amazing once you enter the restaurant.

While having your lunch, there will be performances in the middle of the restaurant, there will traditional music and it’s amazing when you sing in a cave restaurant, it’s really one of a kind experience!

The turkish night is where you paid 60euros per person, and you get to enjoy unlimited foods & drinks with performances as well as belly dance! 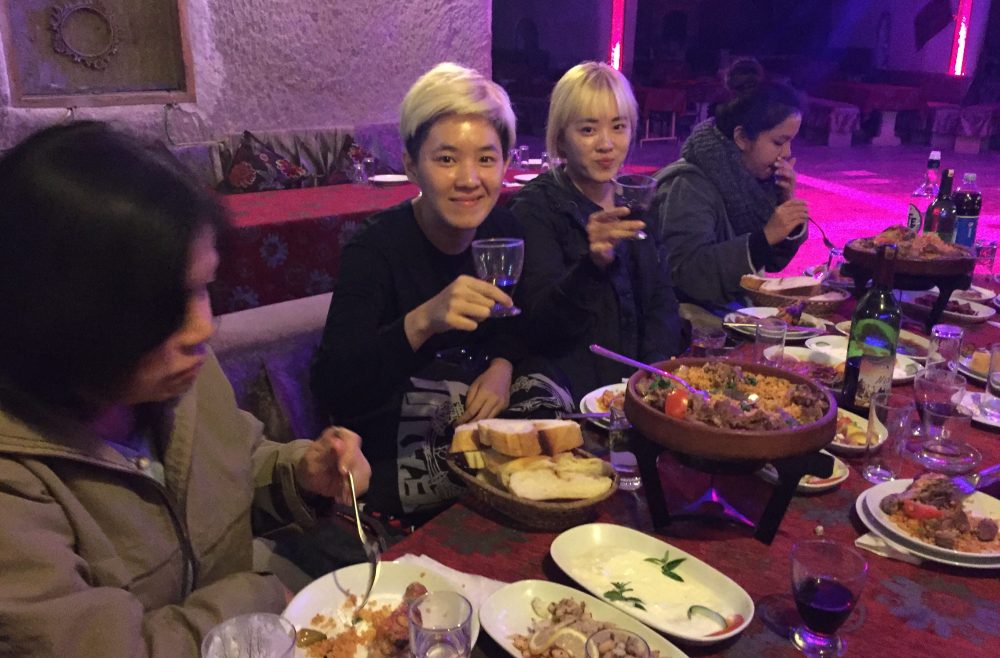 It’s something very cultural and definitely worth paying for.

Despite having a late night drink after the Turkish Night, we managed to get up at 4.30am for hot air balloon! Whether it’s worth waking up for or not, it’s up to you to judge. =D

No one should ever missed the Hot Air Ballon in Cappadocia! If you ever plan a visit to Turkey, though the Hot Air Balloon is expensive, but you should prepared yourself for it! I mean you’re already there for a vacation, it’s 100% worth spending a few hundred € for this.

And a toast to our successful hot air balloon flight.

We just did a quick stop by on this valley as we don’t have much time to spend here for a trek. But you can enjoy a coffee or tea here with amazing view over the valley. 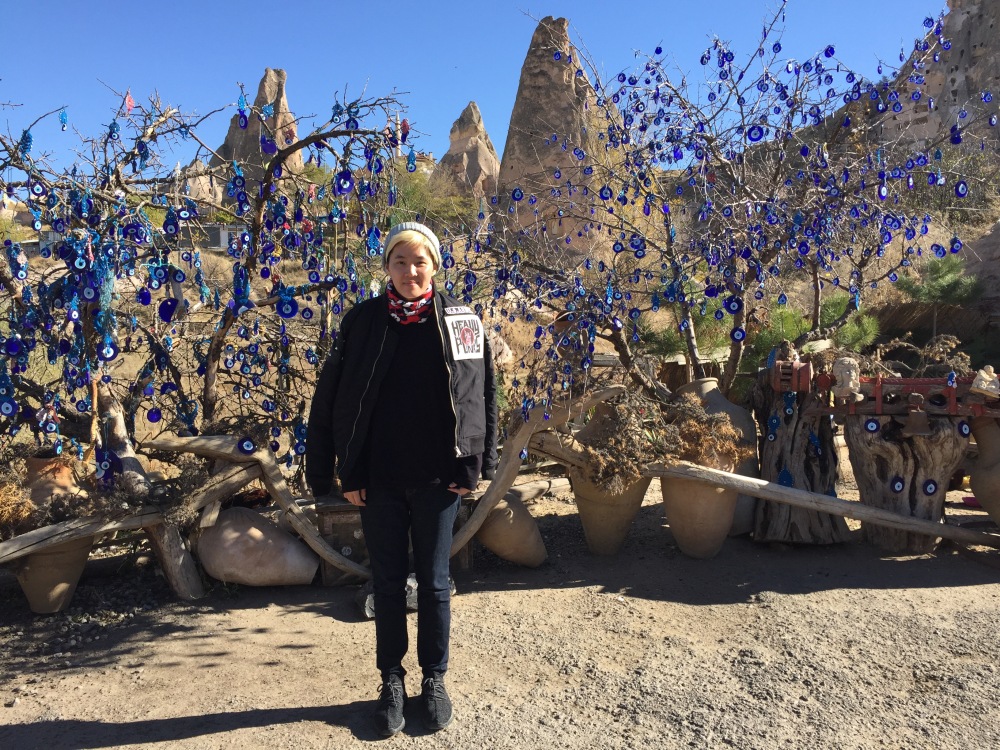 The valley is named for the many pigeon houses or dovecotes carved into the rocks and cliffs. Years ago the pigeons were used as message carriers, and their droppings were used as fertilizer and maybe even for use in making explosives. Today, very few, if any, pigeons are kept in the valley, although many locals keep them as pets in their own columbariums.

Kaymakli underground city is built under the hill known as the Citadel of Kaymakli and was opened to visitors in 1964. The people of Kaymakli (Enegup in Greek) village have constructed their houses around nearly one hundred tunnels of the underground city.

The inhabitants of the region still use the most convenient places in the tunnels as cellars, storage areas and stables, which they access through their courtyards. The Kaymakli Underground City has low, narrow and sloping passages. While the underground city consists of 8 floors below ground, only 4 of them are open to the public today, in which the spaces are organized around ventilation shafts.

*This underground city is a bit more spacious than I thought, it’s not as bad as Cu Chi Tunnel that I went to in Ho Chi Minh but some path may be narrow too!

Rose Valley is a large valley located between Goreme and Cavusin villages, and it is divided into many smaller valleys: Gulludere, Kizilcukur, Meskendir and Zindanonu valleys.

This beautiful valley gets its name from the rose-colored rock that varies in hue and intensity depending on time of day, season and weather conditions. 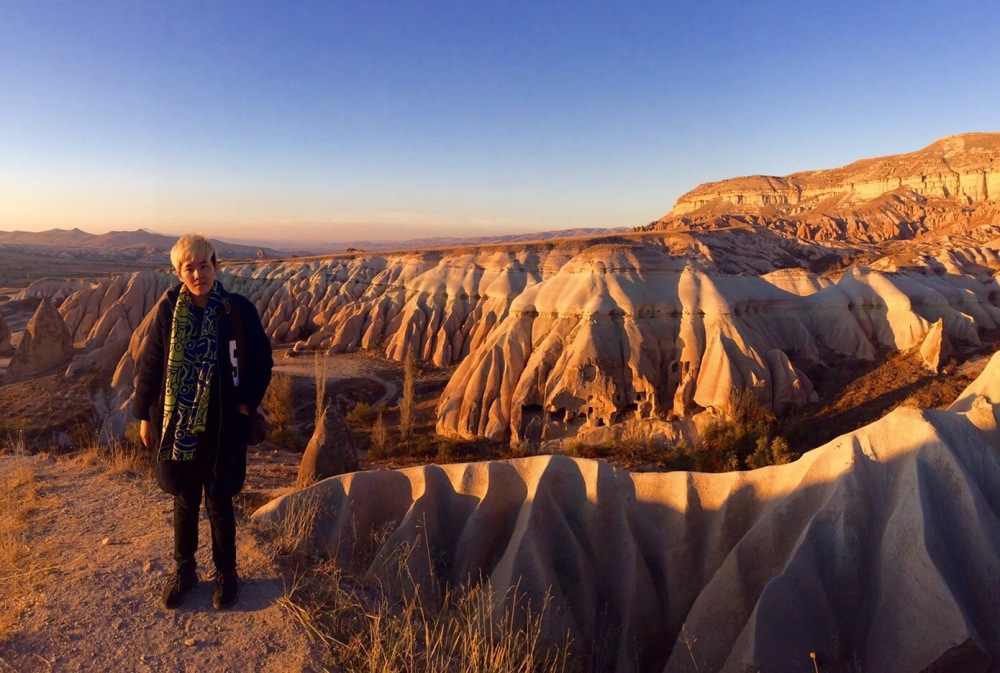 During the hike we will visit several cave churches, cave houses and cave tunnels. Rose Valley has paths for easy, medium and difficult levels. The most common path in the valley takes around 2 hours (3.5 km).

The area is commonly referred to simply as Sunset Point and is located on the road that leads towards Uchisar. Göreme Sun Set Point is also a key attraction amongst tourists and photography enthusiasts, who will be offered a plethora of opportunities to capture stunning photographs of the sun setting in the distance. In addition to the sunset view, the area also provides spectacular views of the entire city, providing the perfect backdrop to compliment the sunset.

The area can be reached by a walk and is in the vicinity of a number of Halal restaurants as well as shopping boutiques that Muslim travellers could visit. A few mosques near Göreme Sunset Point are also located for quick access during prayer times.

The hotel I stayed in Cappadocia is Dedeli Konak Cave Hotel located in Urgup, the owner of this hotel is also the boss of the tour agent I booked. The cave hotel is really nice, breakfast is served well too. 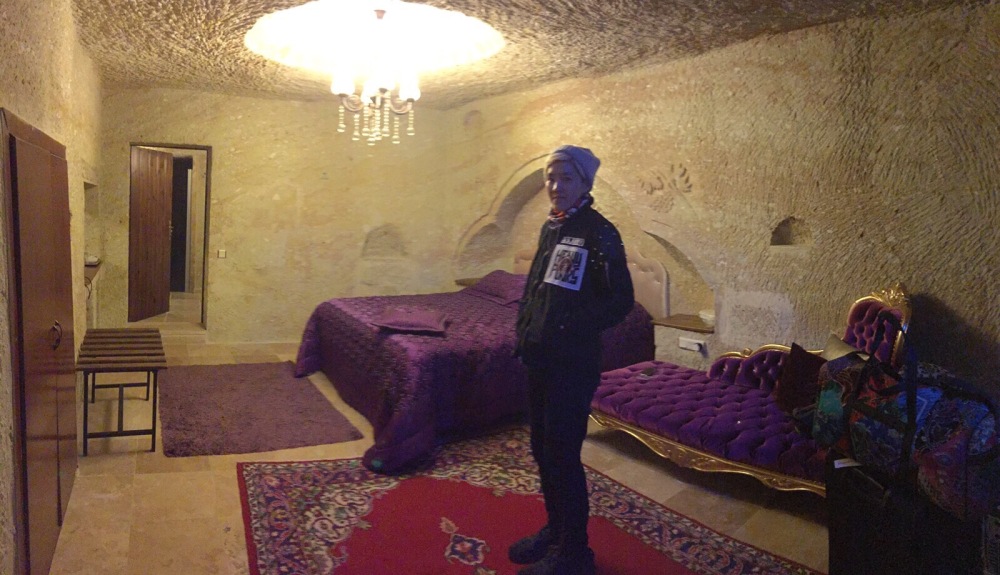 End of the tour back to hotel and pick up luggage for transfer to bus station. Take an overnight bus to Istanbul.

Last but not least, making new friends is always part of a travel journey and thank you so much for all the great people I met and had fun in Cappadocia!

Check out my article at GPSMyCity where you can read travel article when you’re offline!