Despite living in a country that Islam is the official religion of the federation, I still love the modern Islamic lifestyle in Turkey. When would I said so? While strolling through the streets around the famous Blue Mosque and Hagia Sophia, I was kind of surprise to see stray dogs are hanging around the mosque area. 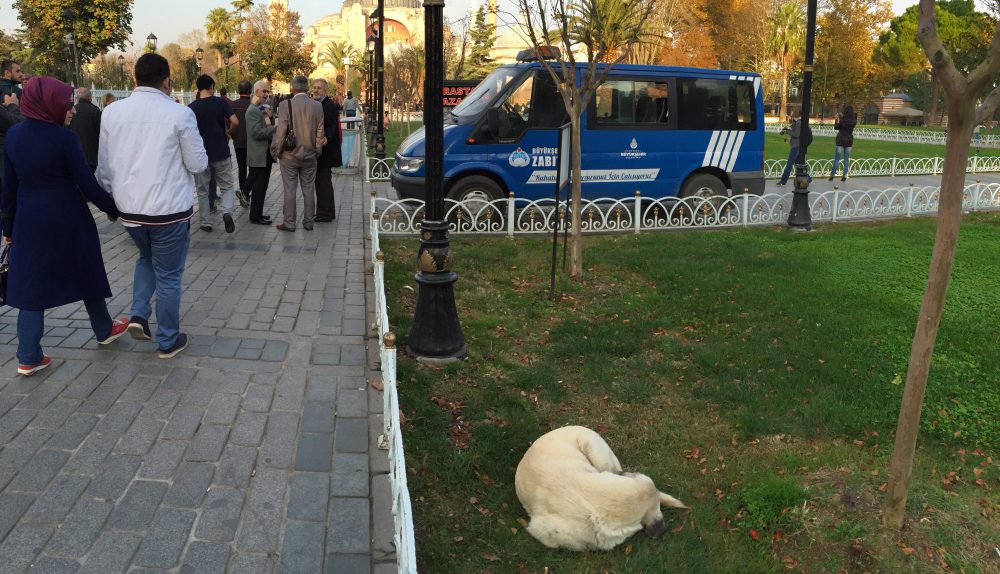 Stray dogs in Turkey are well-taken care of!

This is something really surprised me as for all this while living in Malaysia, I understand that Muslim are not supposed to touch a dog. After spending about 10 days in Turkey, I found out that actually the stray dogs are well-taken care of in the whole Turkey, as most stray dogs will have a tag on their ear which means that they’re vaccinated.

Istanbul is unique among the world’s cities in straddling two continents. The historic Bosporus Strait, which connects the Sea of Marmara and the Black Sea, separates its more-touristed European side from its Asian side, where the vast majority of its residents live.

My choices of Top 6 places to visit in Istanbul:

The top 4 places are actually within walking distance if you’re staying at Sultanahmet, which is also one of the very touristy place, but it’s definitely a friendly neighbourhood.

I think this map by Turkey Travel Planner is really useful, it marks all the metro stations that a tourist will be using, so get familiar with the station names if you plan to travel using the metro.

The first and obvious use of the Istanbulkart is as a transit pass: you place the card on the turnstile sensor (say, at a Metro or ferryboat turnstile, or when boarding a city bus) and the amount of your fare is deducted from the card.

You can use one Istanbulkart to pay for several passengers. You will be able to get the card by Istanbulkart vending machine and also it’s sold by small commercial kiosk but be sure to check several stores as all of them are sold for different price!

So be sure to get 1 Istanbulkart, it will definitely save more cost by buying 1 card and share the cost with a few people and save on travelling fares.

Blue Mosque is one of the must visit in Istanbul, the entrance is free of charge, but just make sure that you dress up ethically to show respect. For lady, upon entering the mosque, a scarf will be provided for you to cover your hair.

The area between Blue Mosque & Hagia Sophia has a lot of peoples hanging around, you can enjoy the local bread, it’s called ‘Simit’ for just TL1, grab it on the street and take a sit on the bench.

The Basilica Cistern, also known as the “Sunken Palace” or “Yerebatan sarayi” in turkish,, was constructed by Justinian in 532 to supply water to the Byzantine Palace primarily. 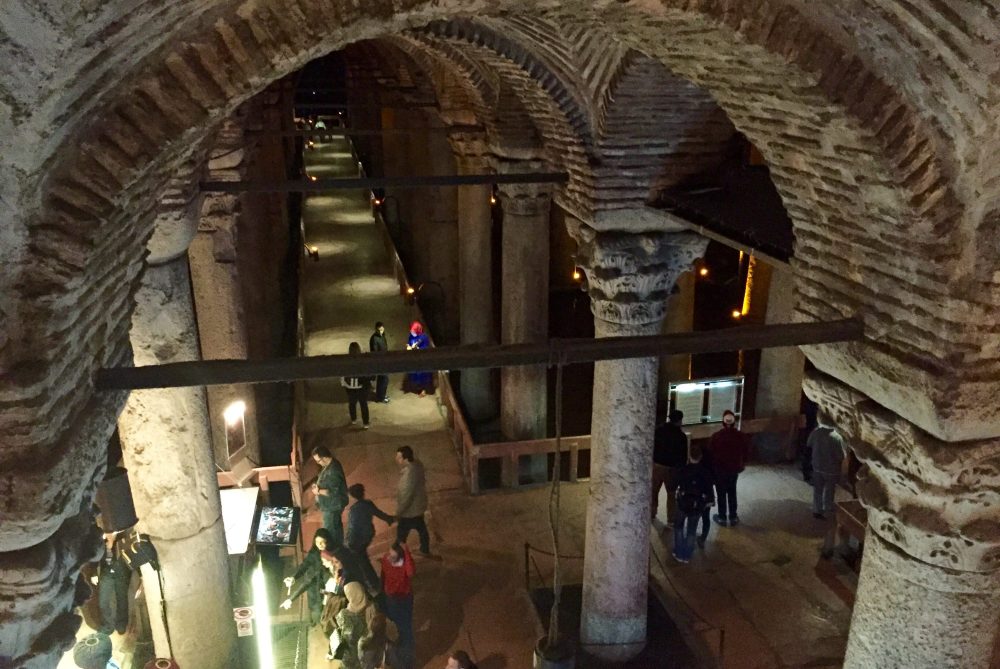 Underground waterway was used as a reservoir for water storage for the Great Palace and other buildings. It is 132 m length, by 65m wide. There are 336 columns in the cistern. Most of the column capitals are either in Corinthian or Doric Style. 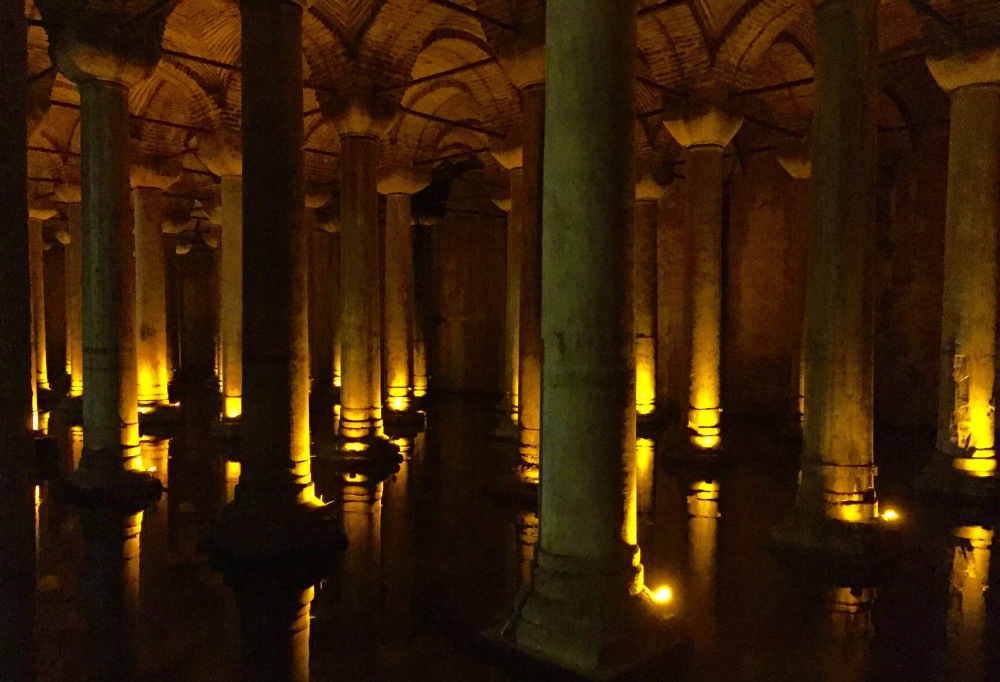 Walk to the back of the Cistern, and you will find one upside down Medusa head supporting one of the columns. Why it is upside down has been a question of much discussion, but the best guess is that the people who placed the stone believed that if the head was upside down, it would ward off evil spirits. 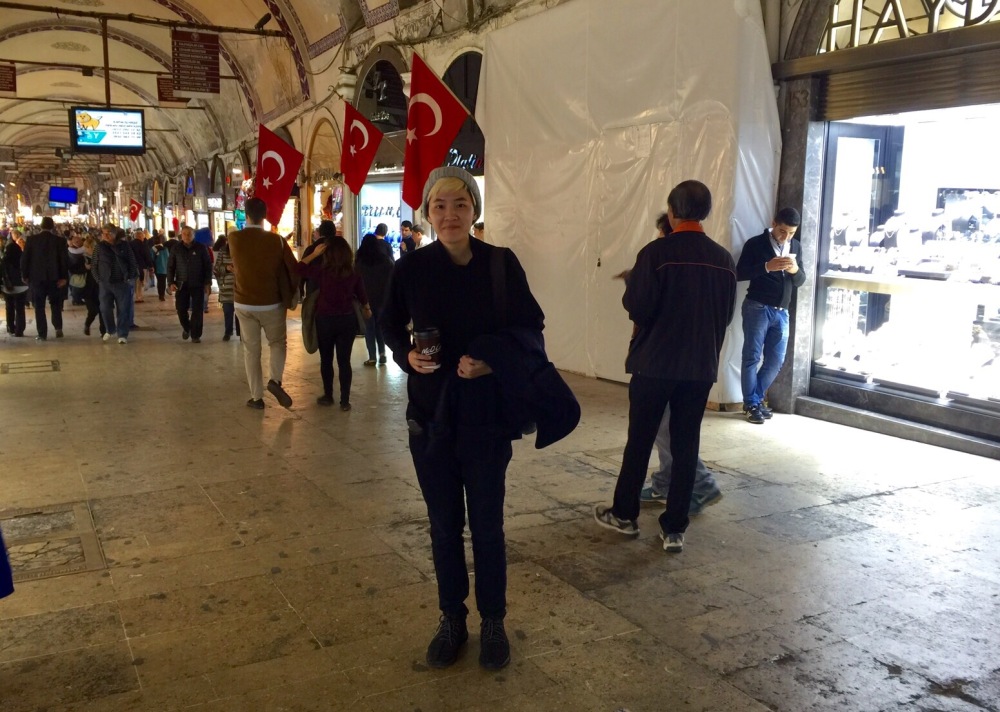 The Grand Bazaar (Kapalıçarşı) in Istanbul is one of the largest covered markets in the world with 60 streets and 5,000 shops, and attracts between 250,000 and 400,000 visitors daily. It is well known for its jewellery, hand-painted ceramics, carpets, embroideries, spices and antique shops. Many of the stalls in the bazaar are grouped by type of goods, with special areas for leather, gold jewellery and the like.

Grand Bazaar is really huge, but all the stuffs here are kind of repeated or most of the stalls are selling the same things over and over again, but it’s a place for you to buy some souvenirs.

The complex houses two mosques, four fountains, two hamams, and several cafés and restaurants. After a stroll around the Grand Bazaar, we went for a quick lunch just right beside the tram line. 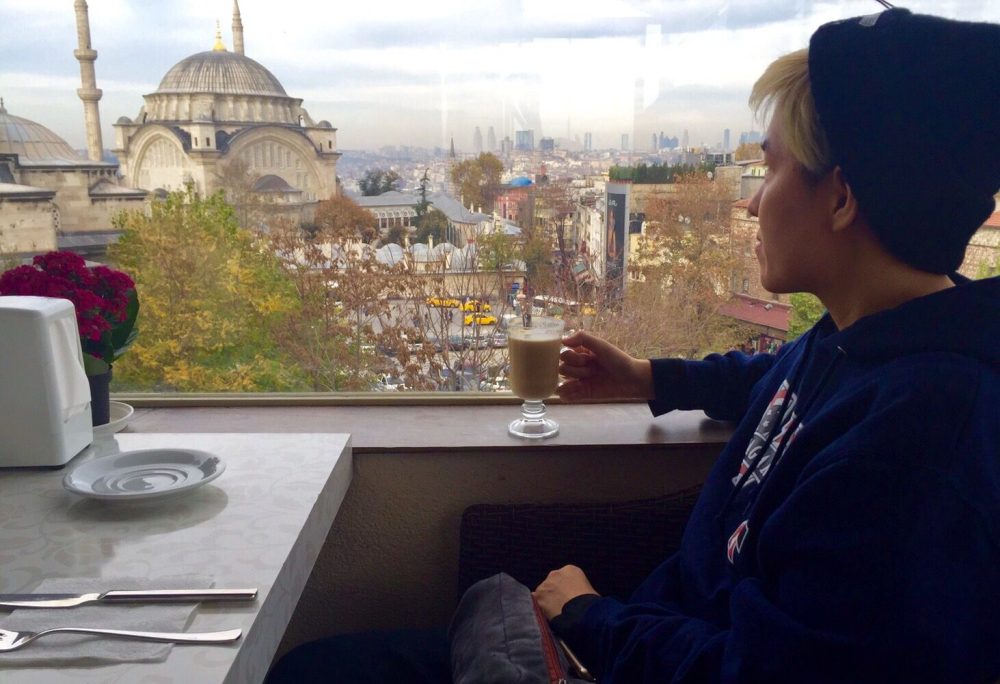 A restaurant recommended by the tourist center, cheap and good food with good view as well! Overlooking the grand bazaar. It’s just too bad that I can’t remember the name of this restaurant! But I guess you will get to it if you ask for info at the tourist center located near Blue Mosque. 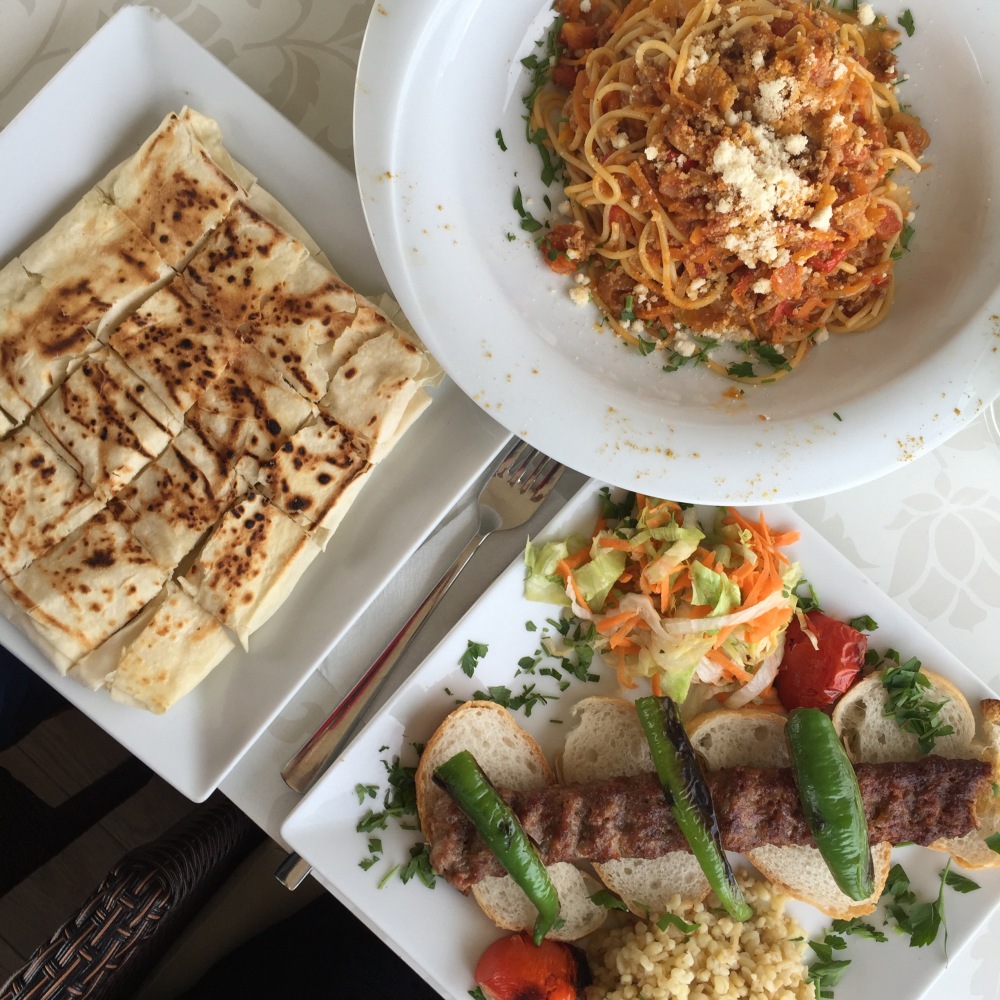 Getting to the Grand Bazaar:

Take a tram to Beyazit, Üniversite or Sirkeci. The Grand Bazaar is around 15 minutes walk from the Aya Sofya/Blue Mosque area.

Taksim is a shopping district, with shops like H&M and a cute tram line. Take the tram from Taksim square to Tünel or from Tünel to Taksim Square. The tram runs down the middle of Istiklal Street (the main street that connects Taksim to Beyoğlu, Galatasaray and Tünel).

The one way full fare cost is 3 TL and you need to purchase a ticket (no cash payments accepted) from the kiosk right by the metro station which is right across the street. You can get off at different points along the route, but I suggest you go to the very end and then walk back to original point.

Every visitor to Istanbul wants to—and should!—take a Bosphorus cruise on the 32 km (20-mile)-long strait which joins the Sea of Marmara to the south with the Black Sea to the north of Istanbul.

Pardon my super tired face because the cold breeze really way too cold on the cruise. The cruise can take as little as 25 minutes, or a full day; it may just be transport across the water, or may include sightseeing and lunch, depends on what ticket you bought.

Several companies operate short Bosphorus cruises that take you part way up the Bosphorus and back down. They run frequently in warm weather, so it should be easy to find a date and time that suits your plans.

Extra sight if you have a bit of time to explore Istanbul: Pierre Loti Café

Another added place to visit is Pierre Loti Cafe. The Pierre Loti Café, named after the French novelist, naval officer and Turkophile, is famous for its spectacular views over the Golden Horn.

How to Get To the Pierre Loti Café?

Any taxi driver will be glad to drive you all the way to the Pierre Loti cafe, but there really is no need for that. On the contrary actually. Just ask the taxi driver to take you to the Eyüp mosque, or alternatively take bus 39, 55T or 99A and get off close to the mosque.

From there you have two options to make your way to the teahouse on the hilltop. You can either climb your way up through the picturesque cemetery or take the funicular which is signposted from the mosque. I suggest taking the last option to reach the Pierre Loti cafe, and afterwards descend by taking the path between the (mostly Ottoman) tombstones.

Where to stay in Sultanahmet? 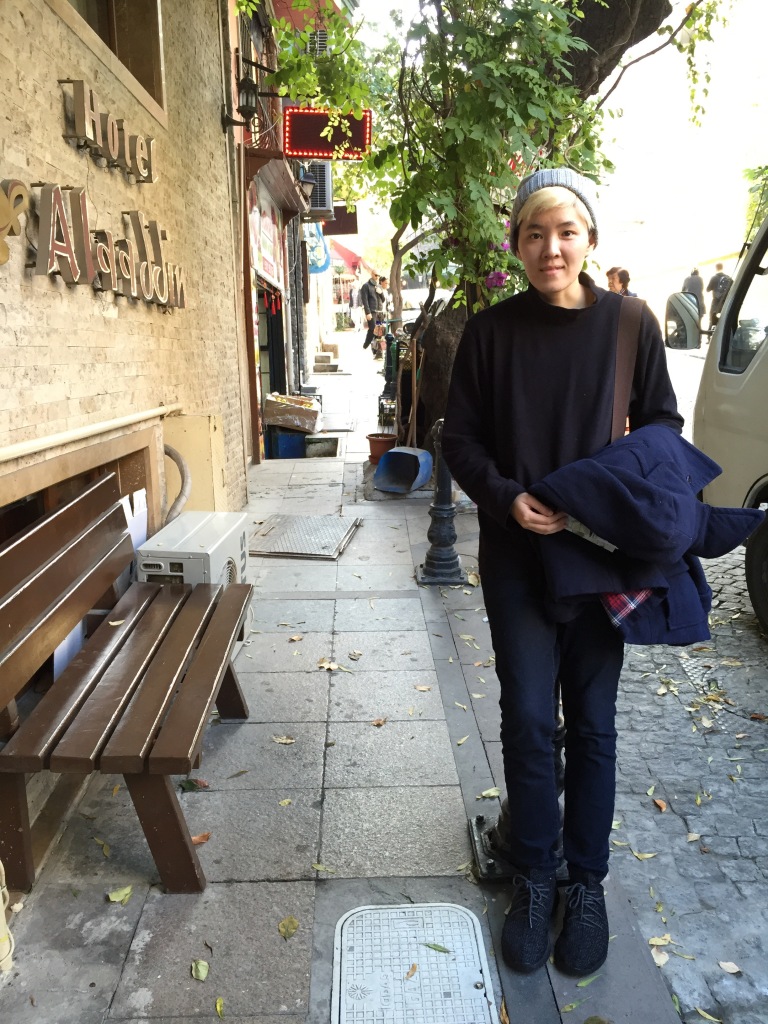 This is a boutique hotel located in the heart o Sultanahmet, within a minute walk you can find street fills with restaurants, and it’s located in between Blue Mosque & The Grand Bazaar, just right behind the Sultanahmet Metro Station. 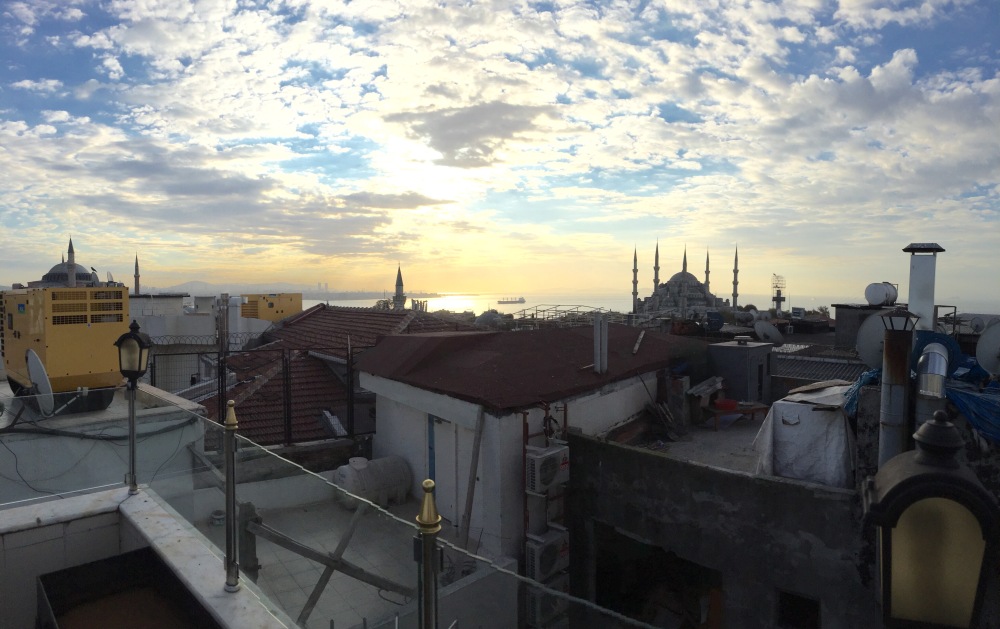 The continental breakfast is good and having your breakfast on the rooftop over the view of Istanbul and the Blue Mosque is really amazing!

Check out my Article on GPSMyCity where you can access travel article when you’re offline – Why Do I Love Turkey – Istanbul?